'Climate Change: Perspectives from the Arts and Humanities'

Why are the arts and humanities important for society? What kind of knowledge do they create, capture and captivate, and why is this important in thinking through ways of addressing our current planetary predicament?

In the months leading up to Cop26 in Glasgow in November 2021 it was anticipated by many commentators that much of the focus would revolve around devising political accords and policy agreements between key actors, sectoral interest groups and representatives of nation states. Notwithstanding important questions that would emerge in relation to which nations and sectors would be able to even attend the meeting, it also became increasingly clear that the role of culture in addressing the planetary emergency was going to be another notable absence in the discussions in Glasgow.[1]

Most of the debates surrounding the meeting were indeed led by political leaders, informed by scientific communities, and were primarily focused on progressing international agreements and multilateral policies to address the urgency of the climate and biodiversity crises. If, however, cultural vitality in its broadest sense is recognised and acknowledged as the fourth pillar of sustainability, then any policy initiatives in relation to environmental change that fail to take into account the importance of the cultural realm will only have very limited success in the future.[2] Culture was recognised as the fourth pillar of sustainable development in 2010[3], to be added alongside the economic, social and environmental pillars as originally formulated by the United Nations, but since that time the cultural pillar has all too often fallen off the international agenda and has remained largely invisible in policy documents on sustainability at all levels nationally and internationally.[4]

While a recent announcement on Creative Climate Action in Ireland is to be welcomed (with 14 projects funded for completion by December 2022), the role that culture and the arts play more broadly is still largely siphoned off into sub-categories of limited funding streams via state bodies such as Culture Ireland, and is still not centrally placed and funded as a core infrastructure and key resource in terms of climate action planning, policy and public engagement in Ireland today.[5] A perfect example of this is how a word search of ‘culture’ in the Irish Government’s Climate Action Plan 2021: Securing our Future (4 November 2021) shows no entry for ‘culture’ but has 94 entries in a 208 page document in which ‘culture’ is found in terms of ‘agriculture’, ‘aquaculture’ and ‘horticulture’. Similarly, ‘arts’ as a term is found 5 times but all in relation to the word ‘parts’.[6] The arts and humanities’ perspectives are thus absented from core national policy, with ‘culture’ as the fourth sustainable pillar nowhere to be seen in the Irish government’s Climate Action Plan 2021.

On 25 November 2021 Future Earth Ireland and the Moore Institute at NUI Galway co-hosted a roundtable discussion to address this important gap in relation to the role that the arts, humanities and culture more widely, play in addressing  environmental and planetary challenges today. The webinar foregrounded the role of arts practitioners to listen the experiences of those working directly in the field, and to learn more about how different kinds of practices create different kinds of knowledges that can offer new pathways to address the climate and biodiversity crises in this pivotal decade.

We were reminded in the webinar how the arts and humanities can help us to see things differently and help us to emotionally connect, intellectually process and cognitively understand the magnitude of the ‘hyperobjects’ that are climate change and mass biodiversity loss.[7]

As CEO of Julie’s Bicycle[8] Alison Tickell stated, “No amount of data, science, or technology can ever make us feel the world in the same way as art can”.[9] We were delighted that a wide range of artists, writers, scholars, practitioners, curators, and those involved in sustainability policy, accepted our invitation to participate where a wide range of view and thoughts on such issues expertise in Irish and international contexts were discussed.[10] 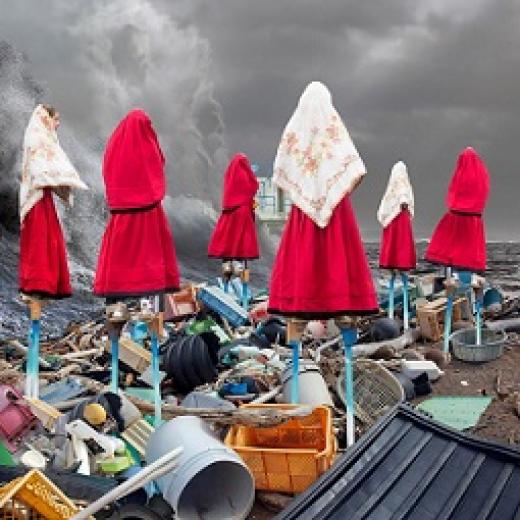 Notwithstanding the relative exclusion of the role of culture and the arts in the policy arena, an important point was made by all panellists on how important it is to have culture and the arts included as part of any national infrastructure policy related to the climate and biodiversity emergency, in addition to the central role that public institutions (universities, national galleries, museums, libraries and other associated organisations) need to continue to play in creating space for public discussion now and in the future. Many of our national institutions and local arts organisations are already leading the way on this, from IMMA in Dublin to the Glucksman Gallery in UCC, often spearheaded by directors, curators and arts practitioners who find inventive ways to use limited budgets to provide opportunities for artists to work and make time for conversations to take place for wide communities of interest, from active retirement groups to schools’ visits, from international symposia to local book clubs. As chair I also wished to foreground that the sphere of culture has to be urgently acknowledged as a core infrastructure and a key foundation stone of sustainable development for any national government to invest in, to help ensure more progressive and eco-socially inclusive democracies in the future.

The all-of-society problems of the climate and biodiversity crises will not be adequately addressed unless more joined up thinking, funding supports and multilateral action takes place across all disciplinary areas of expertise.

Indeed, the recent SHAPE-ID project in interdisciplinary and transdisciplinary practices across Europe (co-led by Professor Jane Ohlmeyer at TCD) has emerged as an important model on how such work can happen and what kinds of toolkits need to be in place to undertake such projects at various scales, nationally and internationally.[11] The IHA’s Environmental Humanities Working Group event, ‘Humanities for the Anthropocene’, hosted by UCC on 7 May 2021, was another important stepping stone in creating an all island cross-disciplinary dialogue in this area.[12] Increased support also needs to be given to national funding bodies (whether via the Irish Research Council, the Arts Council of Ireland, or Ealaín na Gaeltachta) while also securing governmental funding to support more cross-cutting inter- and trans-disciplinary work between STEM (Science Foundation Ireland, Environmental Protection Agency) and AHSS projects by opening up new funding streams for projects that could be co-designed and co-led in a more collaborative way across all fields of relevant practice and expertise.

The important (if limited) role of local government in Ireland was also discussed and how local communities will fight for what they know and love, bringing to mind Wendell Berry’s ideas on ecological intimacies, ‘People exploit what they have merely concluded to be of value, but they defend what they love and to defend what we love we need a particularizing language, for we love what we particularly know.’[13] Here, the importance of language as key repository of knowledge and communication tool was noted, with the acknowledgement of the central role that the Irish language has had in naming, creating and mapping our connections to place and the natural world being observed throughout the webinar. As Michael Cronin argues, ‘As language situates people in their environment in terms of both description and narration – telling you where you are and what’s around you and where you come from – the project of removing Irish from public life has as one long-term consequence the alienation of people from their own surroundings.’[14] The importance of acknowledging the connections between language loss and biodiversity loss (and contextualising this within colonial legacies and late capitalism in Ireland) was also noted by many attendees.

A note of caution was also voiced in terms of how artists can sometimes be instrumentalized in a way that may be counter to an individual’s practice, aesthetic or indeed ethical stance in relation to climate/environmental projects. Important points were made in terms of how artists are not ‘just’ involved in such projects to fulfil the role of a community liaison officer (in terms of a socially-engaged environmental project) or science communicator (in relation to a STEM-funded project where the artist is brought in to ‘translate’ and ‘display’ the knowledge created by the scientists) to reframe and repackage a knowledge and message produced from elsewhere in a more easily digestible form. The aesthetic integrity attributed to the process of art-making is a knowledge-making (and sometimes knowledge-breaking) practice in its own right that has its own distinctive boundaries, and needs to be acknowledged as such by other fields of practice and funding schemes. The risks associated with relegating artists and their practices to a pre-determined space of ‘project outcomes’ in many ways goes against the very idea of the arts in challenging and breaking down societal and/or epistemic boundaries, and indeed risks limiting and cutting off the field of enquiry before the project even starts in the first place.[15]

Finally, it was also discussed that the time and energy dedicated to such work is even more challenging now in a time of a global pandemic, where traditional pathways for funding and paid work have become even more precarious or have evaporated entirely since March 2020. In Ireland there are some moves towards the introduction of a Universal Basic Income pilot scheme for artists (initially costed at €25 million), which is a progressive step in terms of creating the infrastructure for culture and the arts on a more secure basis. This discussion has been refocused during the Covid19 crisis in recognition of the vital contribution that the arts make to the social fabric of our communities, the economic vibrancy of our regions, and our overall sense of national belonging and wellbeing.[16]

Giving a firm grounding and securing investment for the arts could not come at a more urgent time not just for the artists and their livelihoods, but in helping to forge a more eco-socially secure future for all so that artists are given the space and support to do the kind of work that they do best. Our communities, places and planet will be the beneficiaries of any such investment, many times over, in the years to come.

*The Art and Climate Change webinar can be viewed on the Moore Institute, NUI Galway here: https://www.youtube.com/watch?v=T6AJP2kDxzw

[1] In particular, attendees from the Global South, small island nations and poorer countries were forced to scale back their attendance, and thus impacting on the negotiating power of some of the world’s most climate-vulnerable states, due to high costs in relation to travel, Covid19 restrictions and unequal access to vaccines. See: https://www.cnbc.com/2021/11/05/cop26-sharply-criticized-as-the-most-exclusionary-climate-summit-ever.html

[2] See the work of Eric Neumayer and Charles Joly on this in their social sciences blogpost for the London School of Economics:

[5] On this initiative, which was allocated €2 million in funding see, https://www.gov.ie/en/press-release/e8e4a-2-million-creative-climate-action-fund-announcement-by-ministers-catherine-martin-and-eamon-ryan/

[10] For full details on the artists and webinar participants see details here https://www.youtube.com/watch?v=T6AJP2kDxzw

[11] SHAPE-ID is an EU-funded project addressing the challenge of improving inter- and transdisciplinary cooperation between AHSS and STEM disciplines. See: https://www.shapeid.eu/

[12] For more on this see: https://www.irishhumanities.com/assets/Uploads/Humanities-for-the-Anthropocene-Book-of-Abstracts.pdf

[15] For more on this see Jacques Rancière, Dissensus: On Politics and Aesthetics, edited and translated by Steven Corcoran (London: Bloomsbury, 2015). 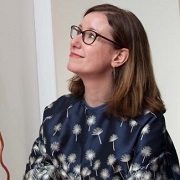 Nessa Cronin is Lecturer in Irish Studies, Centre for Irish Studies, and Associate Director at the Moore Institute, NUI Galway, Ireland. She has published widely on various aspects of Irish Literature, Cultural Geography and Environmental Humanities transdisciplinary scholarship. She was nominated to the national working group of Future Earth Ireland, Royal Irish Academy, in September 2019. nessa.cronin@nuigalway.ie