Halloween: A merry gathering in the face of fear

The ancient Irish celebrated Samhain, the first day of winter – one of the four major pre-Christian festivals – on November 1st. Marking the end of one pastoral year and the beginning of another, Christians later appropriated that day as the ‘Feast of All Saints’, testimony of the opposing belief systems that coexisted for so long in Ireland, pagan and Christian. The festivities of the Eve of Samhain, Oíche Shamhna, began at sundown on the previous day, October 31st. Thus October 31st came to mark the real celebrations. Known as Halloween, it’s a welcome festivity to look forward to as evenings become longer and colder.

This was a night on which the supernatural was deemed to be at its most active and powerful – it was considered an especially powerful date in the calendar when the otherworld could come into the normal world. Despite being associated with the scary supernatural, traditionally, Irish people saw Halloween as a night of fun and games.

Samhain, and the other quarter day festivals, Imbolc, Bealtaine  and Lughnasa, were all rooted in farming practice and marked key dates in the agricultural calendar. In older times, Halloween marked the time when farming families were reunited after ‘booleying’[1]. Booleying was a seasonal movement of livestock that brought cattle and their keepers from their permanent dwellings in lowlands, to temporary summer dwellings and pasture in the uplands[2]. Once a major part of rural life in some parts of Ireland, it generally involved younger unmarried men and women tending livestock and residing with them on the hillsides. Booleying was considered a joyful time of fair weather with plentiful food. As farms took on more modern practices in the late nineteenth century, booleying declined and young farm workers instead began to seasonally migrate or emigrate permanently in the search for work. But for a long time, it took place  between May and October and by Halloween the last of the cattle were expected to be driven home along with their herders.

Halloween, therefore, once marked the time of the safe return of young family members who had spent summer on the hillsides and as well as being associated with bonfires, disguise and high jinks, It was ultimately a night for the family to gather around the hearth at home.

Of course the beginning of winter marked the end of summer grazing but perhaps Halloween was seen as an additional deadline, a night for the youngsters to be finally home from the exposed hillsides and back to the safety of the family residence away from supernatural danger? There was always a great belief in the otherworld in Ireland, and a fear that the beings and faeries from there might abduct young people. As it was believed spirits were about people disguised themselves as fellow-ghouls so they would be safe from harm. People made their masks or disguises as grotesque as they could, rubbing their faces with soot, using false names and changed voices. On that night they doused themselves with Holy Water and carried wooden Halloween crosses, a burnt coal or a black handled knife for protection.  As with the communal fires of Bealtaine and St John’s Eve, the Halloween bonfires were lit to protect people from these evil forces. 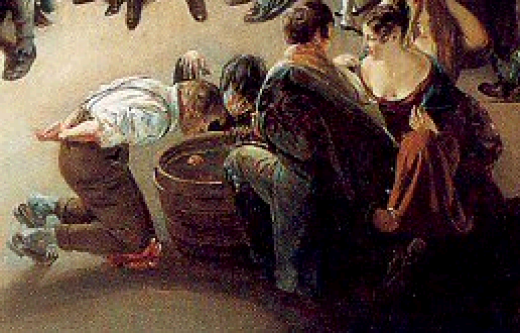 There was an impulse in Irish tradition to fearlessly celebrate in the face of unsettling things that were not fully understood. One example is the unruly behaviour, and games, once permitted at wakes. Halloween is no exception: despite the fear of monsters it was a night for merriment and fun. The artist Daniel Maclise (1806-1870) showed the gaiety of a Halloween house party he attended in Cork in 1832[3], with adults and children playing snap apple and apple bobbing, games still played on Halloween today. It was a time when pranks were permitted: cabbages thrown at doors, gates taken off hinges, chimneys blocked and so on. Perhaps the more raucous goings on were allowed for by people grateful that their young folk were home after booleying.

Alongside this, there is a focus on food, the glut from the harvest allowing a feast of plenty. In Ireland food was seldom in profusion and sugar was uncommon, so people delighted in sweet apples and hazelnuts. These were in such abundance at Halloween that people played games with the excess.

There was colcannon with butter, sweet brack, pancakes made with cream, blackberry pies. In some areas, a drink known as "lamb's wool" was made by mixing the pulp of roasted apples with milk or ale.

The usually single and young people returning from the booley may have had their heads full of romance too. Perhaps missing the freedom or their romantic interests, their focus was to ascertain whether relationships could develop from any liaisons that may have occurred. Halloween was believed to be a great night of the year for forecasting the future, and marriage divination was commonly (but not exclusively) done with food.

The mix of food and divination is still with us in the modern barm brack – still sold in the shops today, complete with a cheap token ring. The idea being, that the person served the slice with the ring will be the next to marry! In the past, bracks were loaded with small objects that foretold the future, these were said to predict events for the coming year: a coin or bean meant wealth; while a piece of fabric or a pea meant poverty, a stick did not bode well either. It was a good time to read tea leaves, too.

It was believed that one’s future husband or wife might appear in a dream on Halloween night if one placed certain objects under their pillow (an apple, or a cabbage leaf or a piece of yarrow). It was believed that if you stole and ate a salted herring before bed, your future spouse would appear in your dream offering a drink of water. One long apple peel, thrown over the shoulder to the ground, was examined to see if it formed the initial of a future spouse. Another custom involved a girl, blindfolded, collecting a cabbage from the garden: if she took one with lots of soil and roots connected with green leaves and it meant a healthy husband, if she picked one with bare roots and withered leaves it did not bode well [4].

Other rituals involved nuts named for couples and placed in the embers of the fire: if the heat caused the nuts to jump apart it indicated an unstable marriage, if one went on fire it meant certain death. If the pair remained side by side and intact it bode well for the union. It is important to note here that such marriage divination was simply ‘a bit of fun’. The real predictors of marriage were settled between parents or agreed with the matchmaker.

Inevitably, the thoughts of people returned to their dead at Halloween. It was a time of remembrance and deep feeling for departed relatives. On Halloween night, the souls of ones’ ancestors were believed to return to the family home. The seats closest to the hearth were considered to be of honour in the Irish household, and an ancient custom was to reserve those seats for the returning dead on Halloween night. Before retiring for bed, extra fuel was added to the fire, the seats were arranged around it and food left out to welcome back their spirits.

Halloween is one of many festivals that Irish emigrants exported abroad, and it has now taken root across the world.

[2] In some parts of the country, such as the limestone plateau of the Burren, cattle are moved for winter grazing. 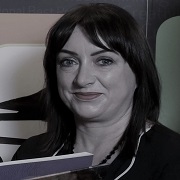 Marion McGarry is an art historian and independent researcher. She is the author of The Irish Cottage (2017) and Irish Customs and Rituals (2020). She lectures at Galway Mayo Institute of Technology, where she is a member of the GMIT Heritage Research Group. She is the current chairperson of Sligo Stoker Society.