Integrating arts and humanities into scholarship on ageing

Since the earliest days of gerontology, there has been a recognition that the humanities and arts provide an important modality for a deeper understanding of ageing. The very first issue of the Journal of Gerontology in 1946, for example, contained in article on ageing as portrayed in the works of Shakespeare by a professor of English literature. This is emblematic of the opportunities afforded by arts and humanities scholarship to understand the lived experience of later life as well as the sociocultural environment in which it is framed. Examples of the scholarly opportunities abound, such as the multitude of rich contributions from many humanities and arts disciplines to the joint UCD/TCD initiative Framing Ageing, funded by the Wellcome Foundation.

Over the many years of scientific meetings of the largest gerontology society in the world, the Gerontological Society of America (GSA), there has been a constant presence of presentations and activities centred on approaches of the arts and humanities, a palette of scholarship paralleled in the Humanities and Arts Section in one of its journals, the Gerontologist.

These activities have been supported by a Humanities and Arts Committee of GSA which under the recent governance reorganisation has become the Humanities, Arts and Cultural Gerontology Advisory Panel. This carries out the same roles of leadership and engagement with the humanities and arts: the new title also recognises the emerging association of these activities with the rubric of ‘cultural gerontology’.

I have been fortunate to be involved with this Panel over the last decade, and honoured to be its chair since 2019. A particularly rewarding aspect has been to work with the Panel to further develop the activities and engagement of arts and humanities with the broader community of gerontologists.

An influential paper published as part of the 75th anniversary celebration of GSA by W. Andrew (Andy) Achenbaum, highly regarded in arts and humanities gerontology scholarship, suggested that the achievements to date of humanities and arts engagement with GSA should further develop along a number of lines. Perhaps one of the most important of these is expanding the intellectual and institutional engagement with Sections, Advisory Panels and Interest Groups of GSA which would provide the type of interdisciplinary dialogue and discourse which is key to the flourishing expansion of our understanding of aging.

We are happy to report that for the 2022 meeting in Indianapolis we are engaging with the Minorities Advisory Panel and the Indigenous Peoples Interest Group in a project with the Eiteljorg Museum https://eiteljorg.org/ to explore ageing through American Indian art in an Educational Site Visit. In addition, a pre-conference workshop with the GSA Academy of Gerontology in Higher Education on teaching humanities and arts should provide a fruitful engagement between the two streams of endeavour.

A second recommendation is to forge partnerships outside of GSA. At a micro level, we aim to engage with major cultural institutions in the host city of the Annual Scientific Meeting, as occurred with the Blanton Art Museum in the 2019 meeting in Austin. This year we are pleased to be working with the Indianapolis Symphony on a concert programme of mature midlife creativity, and look forward to similar engagements in future years.

At a broader level, we have worked with the North American and European Networks on Ageing Studies, both of which are more closely focused on cultural and critical gerontology. In 2021 we held a joint webinar on publishing in ageing, arts and humanities, which included Editors and Section Editors of humanities and ageing journal sections or journal which was very fruitful and offered a vision of a range of opportunities for publishing in humanities, arts and cultural gerontology.

The third and final element suggested was for humanities and arts to fervently challenge the gerontological imagination. It is now 35 years since my first GSA Meeting, and at all times I have been attracted by the humanities and arts presentations as the element of the meeting that most challenged the frameworks in which I practice as a geriatrician and a gerontologist[MF4] [DO5] . I have little doubt that this will continue into the future under the stewardship of the Humanities, Arts and Cultural Gerontology Advisory Panel and its engagement with collaborators both inside and outside GSA.

Our Advisory Panel is also keen to attract GSA members with an interest in arts and humanities to join us on a regular renewal basis, and 3-4 places will become available this year, with applications due by 15 July at https://www.geron.org/stay-connected/volunteer-opportunities 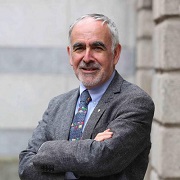 Prof. Desmond (Des) O'Neill is Professor of Medical Gerontology and co-chair of Medical and Health Humanities at Trinity College Dublin. He chairs the Humanities, Arts and Cultural Gerontology Advisory Panel of the Gerontological Society of America, and is Associate Editor for Medical Humanities for European Geriatric Medicine.