Literature and the Diseased Body

‘A shield to protect against syphilis represented as a skull. Lithograph, 1924/1930. Credit: Wellcome Collection. Attribution 4.0 International (CC BY 4.0) (rotated)

As COVID-19 was spreading across the world earlier this year, Tom Peckham wrote the following in Times Higher Education: ‘An interdisciplinary approach focused on the big picture is urgently required to make sense of biomedicine’s worldliness and disease’s entanglement with social and political processes.’ In the months since, history, philosophy, politics, sociology, economics and the creative arts are but some of the disciplines that have made important contributions from beyond the confines of science to our collective understanding of the operation of disease. At the same time, Albert Camus’s 1947 novel La Peste/The Plague was becoming a global sensation. As publishers struggled to keep up with demand, newspaper articles, blogs and podcasts proliferated, usually on the same theme: ‘What Camus’s The Plague can teach us about the Covid-19 pandemic’.

As Samuel Earle suggested in the New Statesman, ‘Sometimes we turn to novels to make sense of our world, and sometimes to escape it. Yet in hard times, we often ask them to do both at once: to make sense of our world, all the better to escape it.’ My research in recent years has investigated what literature can tell us not so much about the world in times of disease, as about disease itself. Turning from the social experience of disease, such as lockdown, or the geopolitical context for it, rendered through the ubiquitous war metaphors so beloved of politicians, I have sought to discover what literature can reveal about the diseased body, including the subjective experience of living with disease.

Disease does not primarily affect healthcare systems, societies or national borders. Disease incubates in the body – though not in a generic sense, for bodies belong to people, to individuals, each with their own thoughts, feelings, experiences and worldview. Yet the body that carries disease – and therefore the person that has contracted a disease – is safely confined via public health guidance on self-isolation or quarantine, compliant social distancing, or the restrictions of a specialist hospital ward. The body is the locus of disease, and the diseased body is a dangerous body, a body around which protective borders must be erected and maintained until health has been restored. The diseased body, then, becomes the ultimate taboo. This partly explains why, at a time of pandemic, so much attention still focuses on the politics of disease, rather than its corporeal, lived or phenomenological reality. 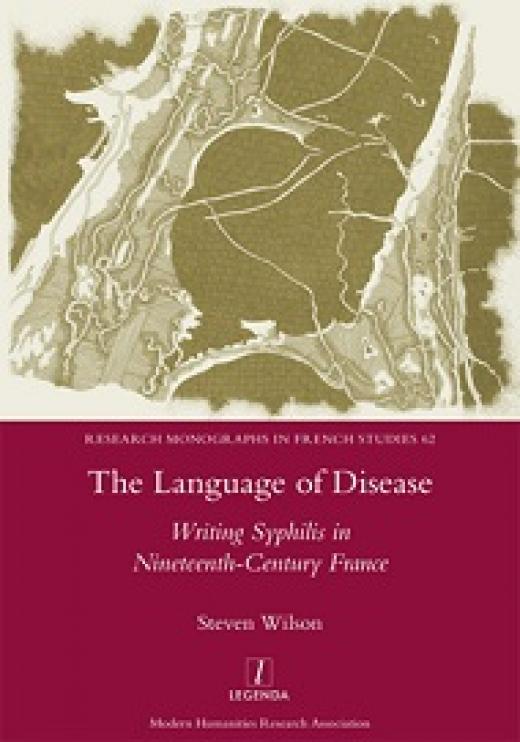 In nineteenth-century France, literary accounts of syphilis, one of the most deadly diseases of its time, and one that is making a particularly dramatic, if overlooked, return in Europe, offer a language that can help us to articulate and understand better how we think about the diseased body. Moving away from medical humanities approaches that, until now, have primarily been concerned with assessing the affinities between narrative and medicine – as found in metaphors and similes such as ‘illness as text’ or ‘patient as text’, both to be ‘read’, and ‘diagnosis as a form of close reading’ – my recent book is less concerned with how the syphilitic body in nineteenth-century France is read as with how it is written. What language do third-person narrators and first-person patients find to capture the diseased body? How does the language of disease in literature draw from the medical, the political, the theological, the visual? How does gender identity affect the language used to describe the diseased body? How does literature enable the patient-writer to find a language to give expression to the lived corporeal and psychological experience of disease? To answer these questions, I have focused on the language of pathology, prophylaxis and pathography in literary accounts of the syphilitic body.

The political obsession with borders at the zenith of European imperialism infects the language used to describe syphilis in the late nineteenth century. In the military context of the Franco-Prussian War, writers often frame disease as an enemy, ‘attacking’, ‘invading’ or ‘infiltrating’ the body. This is all the more resonant in the case of syphilis, whose initial spread was attributed to military invasion and contact when a contingent of Genoese soldiers (including Christopher Columbus) attempted to conquer the Kingdom of Naples in the fifteenth century. But, intriguingly, understudied writers such as Paul Adam and Adolphe Tabarant remap this language onto the hidden pathological realities of the syphilitic body, shifting our attention towards a consideration of the ways in which disease provokes the dissolution of the body’s internal boundaries. In this way, the nineteenth-century syphilis narratives often frame disease as an entity that putrefies the body’s tissue and breaks down bone structures, causing bodily textures to become impaired and capillaries to collapse. This is important because, in disease studies, we mostly focus on what is seen: on the sign of disease rendered on the body’s exterior surface. Yet, by concerning itself with the mysterious corporeality of insides, literature functions as a creative, imaginative space in which broader socio-cultural and historical influences help to generate a language for describing the hideous taboo that is the diseased body.

Literature does not merely ‘borrow’ from science or politics when describing the diseased body. Instead, as the representation of syphilis in nineteenth-century France demonstrates, literature often functions as a space for the circulation and diffusion of prophylactic language to warn the reading public of the dangers of inheriting disease. Moreover, patient-writers can be imaginative in how they use language to describe their syphilitic bodies. In what we might term an early example of autopathography, Alphonse Daudet captures, in La Doulou/In the Land of Pain, the corporeal experience of living with syphilis. Daudet, interestingly, reflects on the limitations of words for expressing physical pain, the primary manifestation of syphilis (and many diseases). Just as disease can destroy the body, Daudet’s text suggests that it can simultaneously devastate attempts to turn the experience into words – at least, meaningful ones. Hence the banality of the language of ‘biting’, ‘burning’ and ‘stabbing’ that we often turn to, even if we have never been stabbed and have no idea how it feels. My analysis of literary accounts of disease has revealed that patients sometimes seek inspiration in visual images to express their condition. In the nineteenth century, textual descriptions of religious iconography, including the crucifixion, were often invoked to capture the experience of a body-in-pain that finds itself confronting the limits of subjectivity and life itself.

The medical and scientific breakthroughs of the last two centuries have generated considerable knowledge about disease — how it operates, how to avoid contracting it and how to cure it. Yet literature on disease can provide a complementary range of important and arguably unique insights into the language we use to describe the diseased body. In this way, literature also prompts us to reflect on why we describe the diseased body in the ways that we do. If we are to develop such understandings, further attention should be paid to the immense contribution that literatures from across the world – from all eras, and with all their linguistic and cultural sensitivities – can make to our collective understanding of disease which, as we are so often reminded, does not respect borders. 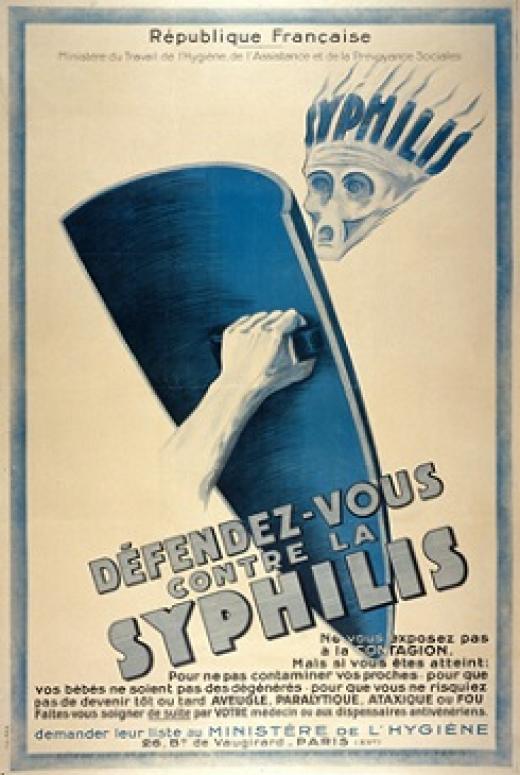 ‘A shield to protect against syphilis represented as a skull. Lithograph, 1924/1930. Credit: Wellcome Collection. Attribution 4.0 International (CC BY 4.0) 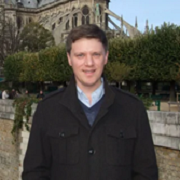 Dr Steven Wilson is Senior Lecturer in French Studies at Queen’s University Belfast. His research seeks to demonstrate some of the ways in which modern French literature, from the nineteenth century to the present, contributes to cultural and global understandings of illness, disease, pain, medical practice and experience, and death.