Now They Fell the Wildwood

Now They Fell the Wildwood: depictions of the natural environment in Irish hunting songs

One of the great joys of humanities research is the constant discovery of new connections and complexities, which often cause us to pause and reflect on our understanding of past and present. My research for the past three years has focused on traditional Irish hunting songs of the long 19th century, a topic which provides endless examples of this principle. Today’s topic is a case in point: it might seem a bit odd to turn to an obscure (and somewhat controversial) corner of the Irish song tradition in search of insight into one of today’s hottest topics, but by their very nature hunting songs are bound up with the environment and humanity’s place in it.

How oft at sunny morning
Sunlight all adorning
I hear the horn give warning
‘Mid the birds mellow call.
Badgers flee before us
Woodcocks startle o'er us
And guns give ringing chorus
‘Mid the echoes all.

This verse, from the opening of ‘Seán Ó Duibhir a Ghleanna’ (‘Sean O’Dwyer of the Glen’, an English-language version of an older, Irish-language song), depicts a classic pastoral setting-out scene for a hunt. But the fine weather, plentiful wildlife, and the raucous noise of the hunt is given as a nostalgic memory, a counterpart to the destruction of the land in the singer’s own time:

‘Tis my sorrow sorest
Sad the falling forest
The north wind brings me no rest
And death is in the sky.

The landscape of ‘Seán Ó Duibhir a Ghleanna’ is somewhat vague and romanticised, containing no place names or definite landmarks. Many Irish hunting songs, however, are so precise in their details that the chase could be retraced by anyone who knew the landscape well. The great Tyrone song ‘The Creggan White Hare’ mentions no fewer than eighteen landmarks and place names, all of them identifiable. Indeed, some songs are so preoccupied with describing the landscape over which the hunt was run, that the narrative takes second place.

‘The Creggan White Hare’ perhaps best typifies the jaunty Irish hare hunt. The song describes a particularly clever hare who escapes from three different hunts and is roundly celebrated as “the pride of Low Creggan.” In fact, Irish hare hunting songs frequently memorialise hunts in which the hare escapes—to the delight of the huntsmen, who take as much pride in the skill and speed of their local hares as that of their dogs. This does not seem to be merely poetic fancy. Irish folklore is filled with ‘uncatchable hares’ and huntsmen so impressed by a particular hare that they swear never to chase it again. In a recent interview, the great singer and song collector Len Graham told me of a man he knew who proudly proclaimed that he hunted hare all his life, and never got more out of it than “a tired dog and wet feet.”

For all that, the songs do not shy away from the topic of death. ‘The Granemore Hare’ tells of a favourite local hare killed by a pack of dogs from a neighbouring town. The song was composed by local poet as a lament for the loss of the well-known and well-loved hare. The hare’s haunting last words immortalise the beauty of its homeland:

“And now I am dying, the sport is all done;
No more through the green fields round Keady I’ll run
Nor feed in the glen on a cold winter's night
Or go home to my den when it's breaking daylight.”

On the other side of the social hunting spectrum, the fox hunting clubs of the landed gentry were deeply concerned with preserving at least a part of the environment for their own uses. In the early 1800s, the Irish fox was threatened with extinction for the same reasons as the wolf. Foxes, unlike hare, were a major threat to livestock and the increase in agriculture was threatening both the hunts’ quarry and the land on which to chase it. By setting aside land for the use of the hunts, planting habitat, and paying the local farmers for livestock (mostly poultry) lost to the foxes, hunt clubs across Ireland set out to make sure that they wouldn’t run out of foxes to hunt themselves—an irony that Ireland’s songsters did not allow to go unnoticed.

Fox hunting songs tend to focus more on place names than landmarks, often recounting wildly improbable distances. One tongue-in-cheek song recounts a fox hunt described by singer and scholar Dan Milner as being run “over a few hundred miles of the poet’s mind.” Upon capture, the fox demands a pen and paper in order to make out his will. Amongst his list of legatees is none other than Sir John Power, of Kilfane, Co Kilkenny, who founded the Kilkenny Hunt Club and began the project of restoring the local fox population there. Perhaps it is this debt which the fox neatly discharges by leaving the erstwhile Hunt Master his “whip, spurs, and cap.”

George Sigerson’s translation of ‘Seán Ó Duibhir a Ghleanna’ began being printed regularly in songbooks from the 1920s, though other versions had existed in the oral tradition for much longer. As Ireland (and the world) entered a new era of change and uncertainty the remembrance of other drastic times were brought into play, and it is hardly surprising that ‘Seán Ó Duibhir a Ghleanna’, with its romantic memory of the destruction of Ireland’s great forests and harried Irish chieftains, should have become popular.

As the fragility of the natural world becomes a focal point of humanity, the image of the fleeing hare with dogs and huntsman in full pursuit has become an increasingly poignant metaphor. The songs are reinvented to meet the needs of new singers and listeners. The story changes, but the songs remain the same. In the midst of today’s escalating environmental debates, we may be tempted to turn again to Sigerson’s words:

For now they fell the wildwood
Farewell home of childhood
Seán Ó Duibhir a Ghleanna
Your day it is o'er. 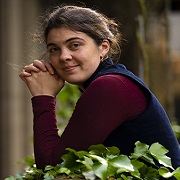 Kara O’ Brien is a traditional singer and song scholar based at the Irish World Academy at the University of Limerick. Currently pursuing her PhD, she also lectures in vocal performance, music industry studies and entrepreneurship. Her research explores the interplay of history, folklore, and language in traditional songs, with a particular focus on the hunting songs of Ireland.