In many respects the rise of gothic architecture in Île-de-France during the twelfth century is a tale of two buildings, and the two ecclesiastics who spearheaded their construction: Suger, abbot of Saint-Denis and Maurice de Sully, bishop of Paris. Both were of modest backgrounds yet became major patrons of the arts and advisors to a succession of French kings. Both set out to create, as Suger put it, monuments in stone ‘more lasting than bronze’.

Suger, traditionally believed to have been born into the peasantry in 1080-81, is now thought to have been the son of a very minor knight from Chennevières-lès-Louvres (c. 25 km north-east of Paris), but De Sully was from peasant stock, probably in the service of Fleury abbey at Sully-sur-Loire (c. 160 km south-west of Paris), and born between 1105-20. Suger became an oblate in the Benedictine abbey of Saint-Denis in his tenth year and this royal establishment was his spiritual home until his death on 13 January 1151. Elected abbot on 12 March 1122, Suger undertook a number of administrative roles for the French crown while restoring and aggrandizing the abbey’s holdings and income and implementing a strict regimen of Benedictine reform. Sometime between 1130-35, he embarked on an elaborate programme of innovatio and renovatio at the abbey church, dating as early as 1125 in terms of planning. His lavish, innovative renovation of the west and east ends of this basilica was in keeping with its royal status; it was not only regarded as the burial place of Dionysius, the eponymous third-century martyr and bishop of Paris, but associated with the French monarchy since at least the burial of the Merovingian king, Dagobert I (d. 19 January 639). The abbey church more recently had served as a royal necropolis for the Capetian dynasty.

Suger’s new building crystallized the Early Gothic style, although several elements we regard as quintessentially Gothic, notably the pointed arch and pointed rib vault, had been used in earlier buildings like the priory church of Saint-Martin-des-Champs in Paris (completed c.1135). It has been stated Suger was the father of Gothic architecture, or ‘an architect that built theology’, as Otto von Simson put it, but this honour should go to the unknown master mason of Saint-Denis. Rather, Suger was a punctilious, totally engaged patron who involved himself in every aspect of the restoration and reconstruction of the abbey church, from sourcing stone from a quarry at Pointoise to designing the complex, iconographic programmes of the sculpture and the exegetical stained glass windows, much of which survives to this day. From the consecration of the western, tripartite façade (with the earliest known rose window in France) on 9 June 1140, to the laying of the foundation of the new chevet (the apsidal eastern termination of the choir in a Gothic church) on 14 July 1140, to its dedication on 11 June 1144, Suger presided over every detail of the building’s fabric and decoration, which was arguably his chief delight. Though some art historians have rejected Erwin Panofsky’s highly selective correlation between mystical theology and architecture in Saint-Denis in favour of the influence of the contemporary theologian, Hugh of the Augustinian Abbey of Saint-Victor near Paris, Suger succeeded in his dream of creating a triumphant articulation of claritas or illumination in a building. Faced with the strongly aniconic spirit of the Cistercian reforms of Bernard of Clairvaux, Suger used the neo-Platonic aesthetics of the fifth or sixth-century theologian, pseudo-Dionysius the Areopagite (conveniently but erroneously identified with the martyred bishop Denis of Paris), which centred on the role of light in experiencing the numinous, as a powerful justification for the building’s decoration, especially its stained glass. 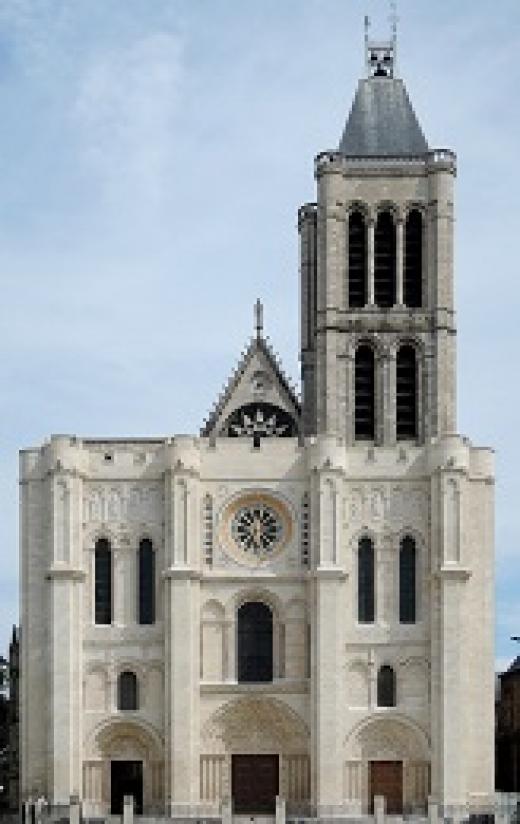 Certainly, Suger set the bar high for De Sully when it came to his dream: to provide Paris with a cathedral worthy of the city’s status as an intellectual capital at a time when cathedrals still had an important role to play in higher education, albeit in tandem with the emerging institution of the university. If we accept that the story of Pope Alexander III laying the foundation stone of Notre-Dame in 1163 is spurious, and that aspects of the reconstruction may have begun as early as the 1150s, the new cathedral is still very much the brainchild of De Sully. By 1147 he was already a canon and subdeacon of the cathedral chapter, being officially installed as the seventy-third bishop of Paris on 12 October 1160. By this stage, Suger’s extended family were ensconced as canons at Notre-Dame, with his nephew Simon the Chancellor being especially close to De Sully. Suger had donated a stained-glass window of the Triumph of the Virgin to the cathedral before his death, which survived until the eighteenth century, and another nephew (possibly a great-nephew), Canon William of Notre-Dame, established an anniversary mass for Suger at the cathedral. Although De Sully was no stranger to curial circles, acting on occasion on behalf of Louis VII, albeit not to the level of co-regent as Suger had during the king’s absence on the Second Crusade, 1147-9), De Sully was primarily a professional theologian, trained in the cathedral school of Paris. This is in marked contrast to Suger, notwithstanding his pragmatic quotations from pseudo-Dionysius the Areopagite via his principal translator and interpreter, the Irish scholar associated with the Dionysian corpus of Saint-Denis since the ninth century, Johannes Scottus Eriugena.

In the Old French chivalric romance, Partonopeus de Blois (c. 1170-88), De Sully is caricatured as a fils à vilain: the jumped-up son of a serf, though he never tried to hide his humble origins. He devoted a large part of his time as bishop to pastoral care, writing a preaching manual, Sermons on the Gospels (1168-75), which survives in two distinct versions: Latin and Old French. As vernacular models, these short and artfully simple sermons could be translated into Latin, but would have been pronounced in French, since they were addressed to the entire congregation. This emphasis on pastoral care points to his vision of the third church to stand on this site: not a light-box studded with exegetical enigmas, nor a jewel-encrusted reliquary for the bones of kings as fashioned by Suger, but a sacred space open to all. From its foundation De Sully’s cathedral was funded by the see of Paris and the burghers of Paris; there is little evidence of royal patronage. According to Henry Kraus, ‘the two lone gifts by royalty to the cathedral fabric’ on record ‘are not supplemented by grants listed in other sources’ and it seems the monarchy were dissuaded from sponsoring the fabric. In fact, De Sully’s building programme, which also included the parvis or forecourt of the cathedral, the bishop’s palace, and the reconstruction of the oldest hospital in Paris, the Hôtel-Dieu, has been rightly described as an urban renewal project. By 1177, the choir was almost complete except for the vaults, and the main altar was consecrated on 19 May 1182 by the papal legate to France, Cardinal Henry Marcy. By the time of De Sully’s death on 11 September 1196, the nave vaults were under construction and the nave was substantially complete by about 1210. The western, tripartite façade was complete to the top of the rose window by 1225, just as the final nave bays were vaulted. Once the main body was complete, work began in 1228 on the first of the 35 lateral chapels built between the nave buttresses and chevet, and the completion of the upper parts of the west façade, with much of the construction funded by the emerging bourgeoisie, especially after 1230. By 1245, the two bell towers flanking the west façade were in place and the cathedral, as originally envisioned by De Sully and his first, unknown master mason, was accomplished.

However, like many Gothic cathedrals, Notre-Dame is the result of a series of additions and modifications, beginning with the initial work in the Early Gothic style on the chevet perhaps as early as 1150-55 – and possibly the west end – to the completion of the final lateral chapel in the Rayonnant style, grafted onto the chevet c.1320, with structural work terminating between 1345-50. As Caroline Bruzelius points out, ‘Notre-Dame was not a church erected in a neat progression from east to west, with each segment completed before the inception of the next ... work was often undertaken in several widely separated parts of the building simultaneously.’ The process of remodeling the transepts begins in late 1240s under the first securely named master of works, Jean de Chelles (fl.1258–65) and his successor, Pierre de Montreuil (d.17 March 1267), which now terminate in monumental, yet delicate façades. De Chelles was responsible for the north transept terminal, pierced by 18 lancets surmounted by a rose window, completed c.1250. In contrast to the western and southern rose windows, most of the original, thirteenth-century stained glass is still intact, and this glasswork is arguably the most important treasure to survive the most recent catastrophe to beset the cathedral fabric. De Chelles was also the architect of the original flèche or spire, a bell tower gradually dismantled between 1786-92 due to wind damage. However, it is the toppling of Eugène Emmanuel Viollet-le-Duc’s controversial replacement in an earlier style, completed in 1859, which will endure as the most eidetic image of Notre-Dame in flames.

Although the cathedral saw the coronation of a ten-year old English boy, Henry VI, as king of France (16 December 1431), and several royal weddings, notably that of Mary, Queen of Scots to the Dauphin, later Francis II (24 April 1558), and that of Margaret of Valois to Henry of Navarre, later Henry IV (18 August 1572), which triggered the St Bartholomew’s Day Massacre, some art historians have overestimated the royal associations of Notre-Dame. Royal patronage increased under the Bourbons, which led to some questionable contemporary design, but Notre-Dame was never truly the king’s cathedral. This may explain Napoleon’s strategic decision to stage his coronation as emperor, as opposed to a regal consecration at Rheims cathedral or the now derelict Saint-Denis, within Notre-Dame’s ravaged interior, in addition to the site’s association with Charlemagne. The coronation (2 December 1804) acted as a historical riposte to the sacral kings of France, but also to the Jacobin ideologues of the Committee of Public Safety who mistakenly purged Notre-Dame of its alleged royal associations in a state-sponsored bout of iconoclasm during 1793, which hit Saint-Denis the hardest. On 22 October of the same year, Suger’s tomb was despoiled and his exhumed remains dumped in a trench, which also acted as an ad hoc, royal ossuary. De Sully’s final resting place was not the cathedral he built, but the Abbey of Saint-Victor, where he had withdrawn upon retirement as bishop of Paris.

Unlike Suger’s vision of theophanic regality at Saint-Denis, De Sully conceived of a cathedral firmly in the hands of the diocese of Paris: an episcopal seat, but also a local church for the people of Paris, where he continued to preach and sing in the choir on ferial days, even as a bishop. Most importantly, Notre-Dame was built by the diocese of Paris and the people of Paris. It is this sense of ownership which was most apparent as Parisians kept vigil for their cathedral through the long, molten night of 15 April 2019. 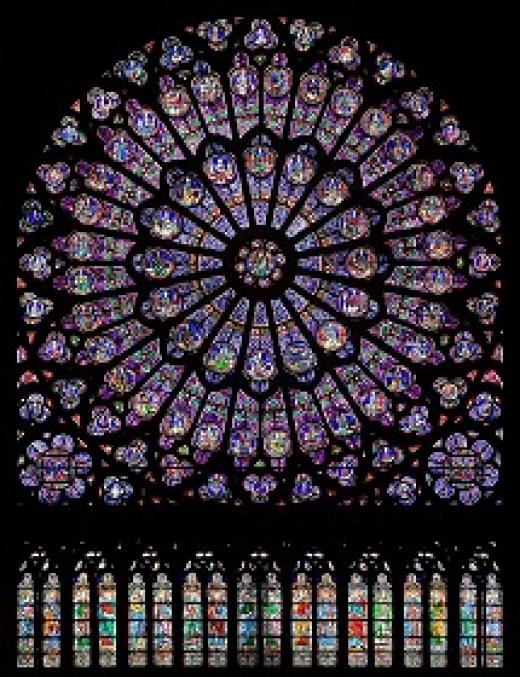