Tales of the times to come: the humanities and scenario planning

What do the humanities have to offer strategists, policymakers, and decision-takers in the age of the algorithm? As machine intelligence and computational power increase, as we gather ever more data from ever more sources, do the humanities still offer a valuable perspective on times yet to come?

At IMAJINE, a project funded by the European Union’s Horizon 2020 programme, we’re exploring the future of regional inequalities across Europe. Looking at inequality doesn’t just mean measuring the difference between “haves” and “have-nots” as we understand them today, and projecting whether that gap will narrow or widen. It means understanding the lenses through which inequality and injustice are defined now - and considering the way those issues might be framed by future generations.

Justice isn’t computational, even when the courts tell us that they are deciding a case “on the balance of probabilities”, as the civil standard of proof is defined in Ireland. The economist John Kay points out that “legal reasoning uses a narrative rather than a probabilistic approach”[1]: we argue a case in court and seek to win by telling the more compelling or persuasive story.

Given that justice is narratively and socially defined, it won’t do to just “run the numbers” when we look at its future. We need to think, not just about how Europeans define regional inequality today, but how inequality and injustice might be understood tomorrow. No one has privileged access to the future, and it’s impossible to gather data and evidence from events which haven’t happened yet; even when foreseeable trends do seem to exist, the experience of COVID-19 has reminded us how easily a seemingly inevitable curve can be bent or broken by events which decision-makers had not accounted for.

Therefore, IMAJINE uses a narrative approach, evoking plausible visions of tomorrow in order to challenge assumptions, stretch perceptions, and shift people’s mental models: putting the imagined future to work in the service of the present.

IMAJINE is currently constructing scenarios for the future of European regional inequality in the year 2048, based on factors such as the degree of solidarity in EU policymaking at the federal level and the overall focus of European society on economic prosperity or wellbeing.

These scenarios allow decisionmakers across Europe to imagine themselves in settings such as one where decision-making has been centralized and automated, with support for regional development calculated using artificial intelligence. Scenario users contemplate the implications of futures where the climate crisis has forced internal migration away from the flooded lowlands of the European coast; where the EU has expanded south across the Mediterranean into North Africa, or east to the borders of Russia. The scenarios invite us to consider futures in which social, political, and economic life is conducted almost entirely online, and transnational corporations have largely usurped the role of the nation-state; they confront us with the question of how Europe might fare if different regions develop and embrace wildly different social values and conflicting notions of identity or even truth.

It's not about whether these scenarios are likely or desirable. The OECD foresight analyst Joshua Polchar compares them to instructional fables like Aesop's Tortoise and Hare: "These stories aren’t true, but you can still learn something from them."[2]

As we develop these "strategic fables", the IMAJINE team have also been experimenting with fresh ways to engage potential users. In the pages of you are here: the journal of creative geography, we published “Instructions for Inhabiting Imagined Futures”,[3] a series of fictions written from a second-person perspective, inviting readers to imagine themselves in the bodies of actors from each scenario. Given the extent to which injustices are deeply and even somatically felt, we sought to activate empathy and use the power of storytelling to draw participants into our world - moving away, again, from inequality being perceived as something quantified, tabulated, and drained of feeling.

As a human geographer from a policy background (Marie) and a strategist who gained a doctorate in intellectual history from within a university English department (Matt), we consider that our training and experience in the humanities provide distinct benefits to our strategic foresight practice and the use of plausible futures to inform policymaking at all levels.

A literary-minded historian brings to scenarios a grasp of historical contingency and process, but also of the ways in which our understanding of a time period - past or future - is constructed from evidence and narrative. Scenarios are imagined future contexts built collectively to support decision-making in the present; they have been compared to novels by the prominent scenario researchers Rafael Ramírez and Angela Wilkinson:

Knowledge in literature is co-produced between writer and reader; they engage with each other in a form of conversation. [...] The novel, like the scenario, enables conversational relations between readers and the writer in reading and re-reading.[4]

Geography, too, yields special insights, as a discipline incorporating the natural and social sciences as well as the humanities. Given its aim of shifting the mental models of decision-makers, foresight work must be alive to affect and sentiment as well as evidence and analysis, yet still methodologically robust and credible. The many lenses through which a geographer may research the phenomena of place are a valuable resource for those of us helping decision-makers to see the world anew. In addition, as the geographer Yi-Fu Tuan noted, “[h]ow time and place are related is an intricate problem that invites different approaches”.[5] We spatialize time when we think of it as an arrow, or imagine the future as a place where we will one day reside. Places, too, have a temporal element as territories and identities form, transform, and disappear over time, while geological processes slowly cause even the most apparently immutable landscape to shift and change.

IMAJINE’s four scenarios might not reach to a geological time scale, but by showing us visions of Europe in 2048, they seek to attain a distant vantage point, revealing something about our present situation which can’t be seen otherwise. Venturing into the indistinct terrain of a future characterized by uncertainty and turbulence, pushing the boundaries of what is considered plausible, people engaged in scenario planning expand the mental territory which the future may occupy, allowing decision-makers to consider and learn from futures which previously lay in their blindspots.

Setting out on such a voyage requires travellers to prepare themselves appropriately beforehand; it turns out that a training in the humanities could be one of the most valuable tools in the scenario planner’s kit. 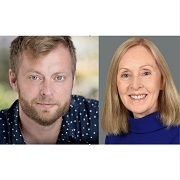 Marie Mahon is Senior Lecturer in Geography at NUI Galway. She researches on urban-rural change & development and change in rural communities. She leads the foresight component of the Horizon 2020 IMAJINE project.

Matt Finch is an Associate Fellow of the University of Oxford’s Saïd Business School. He teaches and is Lead Facilitator on their Oxford Scenarios Programme. His PhD is in Modern Intellectual History. He consults on strategy and foresight with organizations worldwide.